In this post I perform a quick analysis of a recent AgentTesla SMTP variant sample, paying special attention to the strings decryptor (most of the interesting information is kept as encrypted strings, smtp server and mail address included), in an attempt for documenting a bit more the decompiled source code with references to the decrypted strings where they are used, to understand how the malware works.


1. About the Sample Classification


I have had lot of problems to classify this sample, not clear if Megalodon or Agenttesla SMTP variant.

At this tweet I tagged it as Agenttesla, and, in fact, when I started to write this article as agenttesla, then i changed to megalodon, and finally again to agenttesla.

It seems the sample that I analyzed is a newer version of the antiy labs article' one, with encryption of strings and a kind of mixer for the index into the table of encrypted strings.

2.1. Shellcode and jump to unmanaged code

The loader is not hardly obfuscated. The malware seems to decode a shellcode and a second unpacked PE from a image at resources: 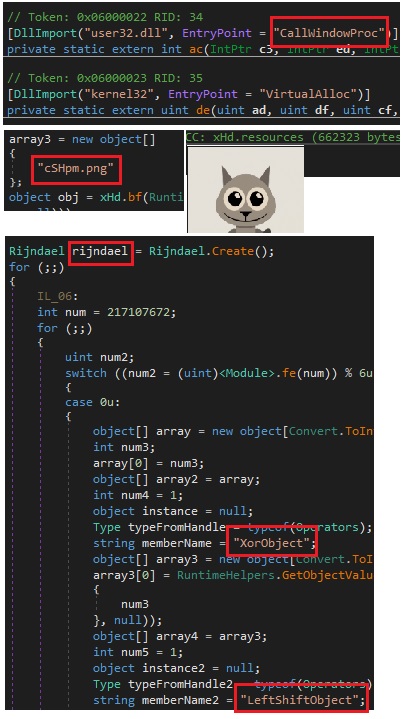 Once the shellcode + pe is decrypted, it allocates memory (VirtualAlloc) and copies the shellcode there. To jump the unmanaged code (the shellcode) it creates a window and associates the shellcode address to that window (the window's procedure), and then it calls CallWindowProc:

The shellcode creates a new suspended process from the same executable to perform hollow process: 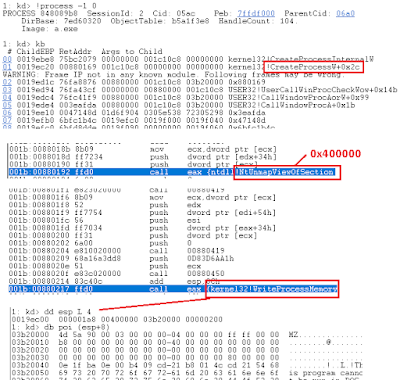 In summary, the shellcode creates a new suspended process, calls NtUnmapViewOfSection to unmap the original PE image from memory, then allocates memory for writting the unpacked PE image (VirtualAllocEx), and copies the unpacked PE (mapping each section at the corresponding in memory rva) by calling WriteProcessMemory (btw, the injected PE is .Net PE, the unpacked agenttesla). Finally it calls SetThreadContext to set EIP = RtlUserThreadStart, and ResumeThread. 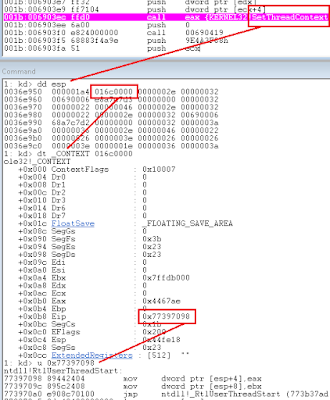 
The malware contains an array of encrypted strings (it is object_0 at this source):

Each time the malware needs a string, it calls a function that receives as argument an ID for the needed string:


The string decryptor "smethod_strings_decryptor" doesn't receive a index into the array of encrypted strings as argument, it receives a kind of ID for the strings:

The first block of code of the decryptor of strings is a mixer (it is found in the same source that the encrypted strings) that transforms the given string ID to the index into the array of encrypted strings for that string: 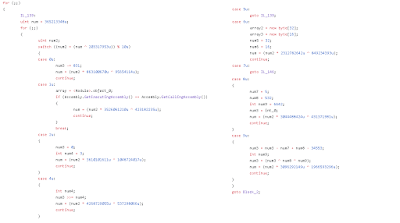 An equivalent python code for this mixer is at github.

I guess this mixer could change between samples and versions.

And the string is decrypted by using AES_CBC algorithm. At github you can find an equivalent decryptor written in python:


It receives as argument an string ID and print the decrypted string for that ID.


Here it's the full list of decrypted strings that the analyzed sample use:

This source code is commented with the associated decrypted string for each part of the code where an string is being decrypted, making easier to understand the malware behavior: 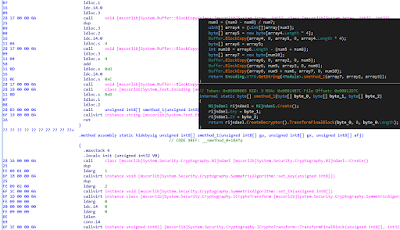 Posted by peppermalware at 8:26 AM